Plovdiv a Must Visit on Any Bulgarian Itinerary

Originally Plovdiv was thought to be the oldest city in Europe.  It’s history is now under question due to new archaeological developments.  However, it is believed to have been settled for 6,000 years.  And continuously inhabited since that time.  This makes Plovdiv a treasure trove for antiquity lovers and a must visit on any Bulgarian Itinerary.

We took the bus from Sofia with much less drama than our bus experience to Eger.  Arriving in less than 3 hours we made our way to our Airbnb in the city center.

Immediately we were struck by the beauty of this city.  The large cobblestone streets flanked by expansive trees made it feel quaint and intimate.  Yet, Plovdiv is the second largest city in Bulgaria.  It is much larger than it feels.

Once we started exploring all of Plovdiv’s nooks and crannies, we understood how large it really is.  There is so much to see there and in the vicinity.  Here is what we really enjoyed in Plovdiv and what makes the city a must visit on any Bulgarian itinerary:

Kapana is a hipster neighborhood filled with cute cafes, bars and galleries.  It’s name means “The Trap” in Bulgarian.  The 5 centuries old craftsman neighborhood was a maze for people to wonder through the labyrinth of streets and artisan shops.

I could spend a long time wondering these pedestrian zone cobblestone streets.  Looking at art in the galleries and marveling at the interesting street art that the Kapana neighborhood has to offer.

Our Free Walking Tour guide explained that the Kapana neighborhood was brought back to it’s glory just recently.  Perhaps in anticipation of Plovdiv becoming the European Capital of Culture in 2019, perhaps for the tourists.  Regardless of the reason, the streets are lovely and for me they were a true highlight.

The Street Art in Plovdiv is some of the best I have ever seen.  Vibrant in color and rich in meaning it kept me wondering, interpreting and asking a lot of questions.

Plovdiv has a high concentration of artists who enjoy sharing their works on the cement walls of the city.   Their canvas is limited as most of Plovdiv’s walls are ancient and off limits.

Kapana has the highest concentration of Street Art.  But it can be found throughout the city.

There are many other locations, hidden away that showcase brilliant art.  The underpass next to the former Turkish Baths some years ago became a blank canvas on which artists from all over the country could showcase their talent. Unfortunately, some of the murals have been vandalized.  Some have decayed.  Yet the place is still a living gallery of Bulgarian street art trends and styles.

Another place to enjoy street art is behind the Drama Theatre.  On the street just above the Together Sign , turning left on the street above, is a treasure trove of phenomenal murals!

If you want to do your own “free” walking tour to see all the Street Art of Plovdiv, follow this great map.  It was put together by Plovdiv City Card.

The poetic artists have projected stories and fables into vibrant displays of art.  The colors are vivid and the imagery is captivating.  The art dates back to 1995.  This makes Plovdiv one of the must visit places on any Bulgarian itinerary.

Plovdiv has one of the best walking tours in the Balkans.  It is run by a NPO  (non profit organization) called 365.  It’s name is such since the tours run 365 days a year come rain, sleet or shine.  Yes, it is free but tipping what you think this tour would be worth is customary (about $4-$5/person).

The tour covers much of the history, legend and architecture of the Old Town.  As with most walking tours it is best to do it upon arrival to a city.  It provided a great overview of what to see and where to go for our remaining days there.

Arriving in Downtown Plovdiv, I was certain that we were in the Old Town of the city.  In some ways we were. Although there is a second “Old Town” further up the hill.

The main pedestrian street strarts from The Central Square of the city and ends at the Novotel Plovdiv.  It is a broad cobblestone walking street.  Lined with beautiful and unusual copper drinking fountains and trees at 1.8 km in length,  it is the longest pedestrian street in Europe.

The Ancient Stadium of Philippopolis is amongst the largest and best-preserved buildings from the time of Ancient Rome on the Balkan peninsula. It was discovered recently as the stadium is located under the main pedestrian street of the city.

Built by Emperor Hadrian in the 2nd century AD, it had seating for over 30,000 spectators!  Today, only the north and the south pieces of the structure are visible.

During the summer, free concerts are performed at the north side of the stadium.

In the center of town and next to the northern part of the Ancient Stadium of Philippopolis stands one of the oldest Ottomon buildings in the Balkans.  It is the Dzhumaya Mosque.

The mosque was built on the site of St. Petka Tarnovska Plovdiv Cathedral soon after the conquest of the city by the Ottoman army in 1363. During the reign of Sultan Murad II (1421-1451) the old building was demolished and today’s mosque, called Ulu Dzhumaya Mosque, meaning Main Friday Mosque, was erected in its place.

It is free to visit and cover ups are provided if required.

This is one of the best preserved Roman Theaters and one of the least visited ones.  Besides Rob and I, there was barely anyone else there.  Built in the 2nd century AD under the orders of the Roman Emperor Trajan, the theater was  seriously damaged in the 5th century AD by Atilla the Hun.  Today, it has been restored and hosts musical concerts and art events in the summer.

The Old Town is filled with beautiful and unique Museum Houses.  Here are the most popular ones:

There are a few destinations just 18-28 kilometers from Plovdiv that are worth a day trip.  The bus from the Rodopi bus terminal in Plovdiv runs every 30 min to 1 hour.

There is so much history in the Bachkovo Monastery and so much beautiful nature.  Built on the Rhodope Mountain side, the Monastery also offers a wonderful historic hike.

Right in front of the main entrance of the monastery is the beginning of the beautiful trail named “The Green Path“ which leads to the Kluviyata Waterfalls. The start of the path is marked by a small green door and a sign. The whole route passes through the biggest reserve in the Rhodopa Mountains named the Red Wall Reserve.

For great step by step directions of this 2 hour hike please go here.

This fortress has existed since the times of the Thracians in the 3rd century BC.  Enlarged and fortified in 1231 during the reign of Tsar Ivan Asen II, it was mostly destroyed during the Ottoman Empire. “The Holy Mother of God” church built in 12th century AD is the sole building which is completely preserved. 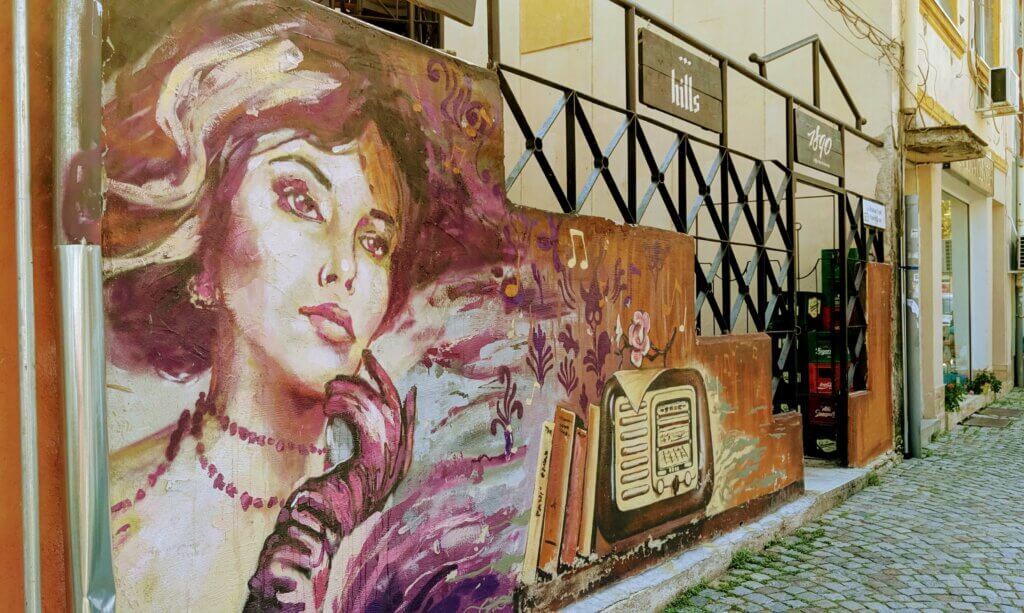 Plovdiv is one of those very special places that will remain in my heart.  There is so much history, art, lore, warmth from it’s people and natural beauty within it and around it.  All of this makes Plovdiv a must visit place on any Bulgarian itinerary.

Have you been to Plovdiv?  Please share your thoughts and anything that we missed!

This site uses Akismet to reduce spam. Learn how your comment data is processed.

We are Rob and Masha and we love travel and adventure.  The executive world was getting a bit too stressful and Monday mornings were feeling like we were on a treadmill of life.  We sold our house, donated all of our worldly possessions and hit the road with a backpack.  Rob had started travel hacking a number of years back, earning miles and points  to afford us the ability to travel in style but on a  budget.  We will be sharing our tool box of tips and tricks with you throughout our blog so that you too can travel like us – Dancing Panda style.